Fogal has been District Attorney since 2009, taking office after the untimely death of then DA Jack Nelson.  At the time of Nelson’s death, Fogal was a registered Independent, but quickly changed his registration to Republican so that he could run for the office of DA.  Fogal also almost immediately joined the vile group of renegade “Republicans” known as “The Franklin County Reagan Coalition”, which was founded in 2008 to compete with the local Republican Party. In June 2014, the Reagan Coalition took over the local party and in the ensuing years have succeeded in dismantling all of the progress made by Republicans in the preceding 20 years by bleeding the treasury and shutting down virtually all voter outreach operations.

In return for Fogal’s fealty and monetary contributions, the RINOs of the Reagan Coalition work to ensure that Fogal will always run unopposed, a tactic that they employ with all politicians under their control.

When I discovered the Fogal letter (below), I admit that I found it hard to believe that he would pen such a treacherous piece, so I confirmed it by emailing Matt. He responded that he did write it, almost sounding proud of it.  Fogal is the third local Republican to go off the rails lately, with County Commissioner Dave Keller and Chambersburg Mayor Walt Bietsch joining the Democrats and their Governor Tom Wolf to keep Franklin County locked down despite the decline in Coronavirus cases.  The fact that local Republican officeholders seem emboldened to come out as “Democrats in all but name” is due to a local Republican Party that is all but dead, and under the control of the liberals in the comically-misnamed Reagan Coalition. In fact, the local titular and unelected party chairman has all but quit on the job, having not been seen nor heard from for months.

Suffice it to say that the citizens of one of the most conservative counties in Pennsylvania deserve better. The top county law enforcement officer in the county should be working to protect the citizenry, and not bowing to threats from an anti-American hate group.

In other words, Matt Fogal is incapable of doing his job, and should resign immediately. Failing that, Republicans should find a law and order candidate to unseat him in 2023. 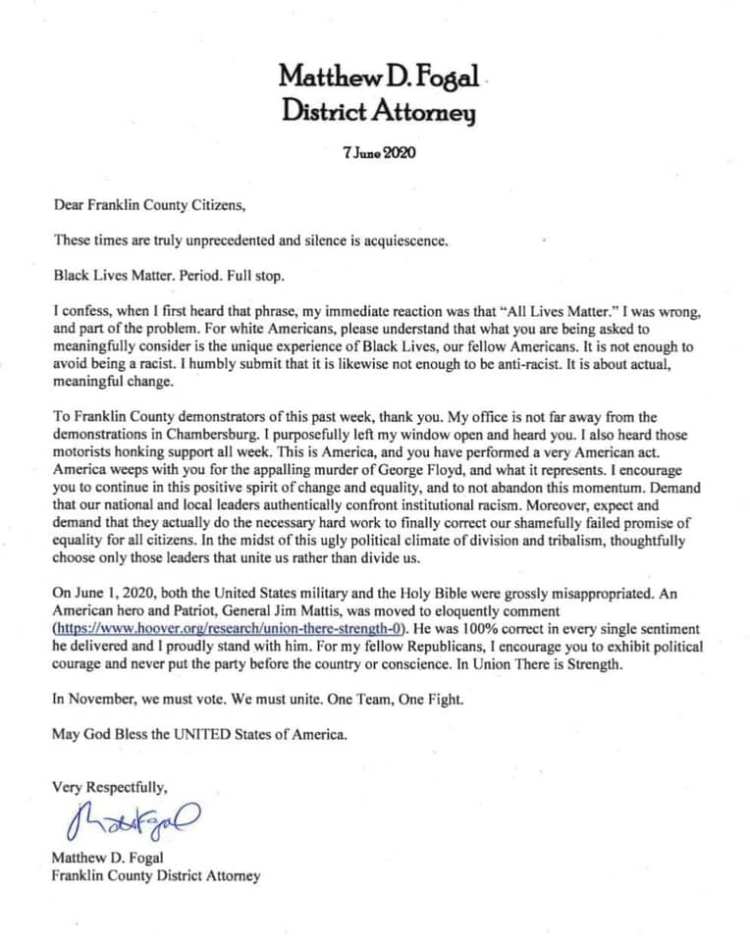